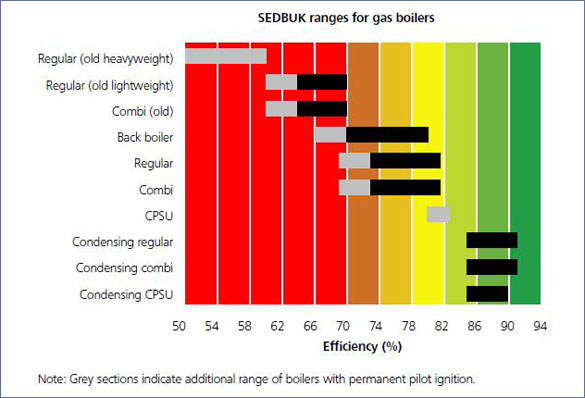 From 2005 all new boilers installed in the UK have to be condensing type, ie, high efficiency at up to 92%, or called A rated, compared with casting iron type boilers which is only around 55% in efficiency. A high efficiency boiler will save you gas consumption in the long run.

heating is more than half of the total household energy required. A higher efficiency by a modern boiler could be achieved by running it at condensing mode while it is on the heating demand.

One of the easiest ways of reducing your gas bill is to use the system in such a way that it doesn't heat the house unnecessarily, or put such a strain on the boiler that it is wasteful.

These are your typical wall thermostats and programmers that most people in the UK are used to. They are the absolute minimum standard of control set in the UK, and because of this, the vastly most installed. The pit fall of these controls are that they do not make enough use out of condensing gas boilers potential efficiency. However they do have their place, where the heat producing appliance does not benefit from operation at low temperatures, the property has low occupancy, and the usage pattern of the house is regular, however even then there may be benefits to using more intelligent controls.

TPI (Time Proportional & Integral) control is an industry standard term for an On/Off control using an advanced energy saving control method that can be used by most heating systems. The controls simply switch current supplied to the boiler on or off at different times. Unlike a traditional thermostat, these rely on digital technology that matches the boiler firing to the load on the system.

In our opinion, TPI controls for heating are a minimum with a boiler new install or upgrade for extra energy saving and confortable room temperature controls.

OpenTherm is a communication protocol in which sensors can provide live feed back to the boiler so it can modulate according to load, this gives a very responsive system but if not set up correctly at the expense of its maximum potential efficiency.

Weather compensation controls enable a condensing boiler to work at its optimum efficiency. The controls allow the boiler to vary its operating flow temperature automatically, day by day to suit the weather outside and the temperatures inside the house, rather than heating up, overheating and turning off again (i.e. on-off controls).

Weather compensation works with a sensor outside and another in the boiler which continuously communicate with each other and vary the boiler’s flow temperature, rather than continuously turning the boiler on and off and wasting energy. The aim is to keep the temperature as low as possible so the boiler condenses for virtually all of its operating period. To get the most from weather compensation, radiator sizing and condensing theory are essential to understand.

Weather compensation controls are supplied with the same boiler manufacturers.

We are a Nest official approved installer!

Remote control of your home is now a fashion! Since Nest, there have been some internet thermostat models developed by British Gas (Hive), and by independent controller make like Honeywell, or by boiler manufacturers like Vaillant (vSMART) and Worcester (Wave). Among them we still believe Nest is the best. It is made for purpose, massively produced worldwide, and has a very few call back rate.

We are probably the only boiler installation firm in St Albans with NICEIC electrician qualification, so we are competent on electrical controls for boilers and central heating systems.

The only question for customer is, what is type of your existing room thermostat, wired or wireless one? If it is wired, your new Nest install only need Nest thermostat itself, otherwise if your current stat is wireless one or you don't have a wired room stat now, you also need buy an extra Nest Stand at £29.

Lyric T6/T6R is another good smart control from Honeywell which, as Nest 3G, is classified as ErP class IV (TPI) or ErP class V (OpenTherm).

Lyric T6R is a wireless model to suit there isn't a wired room stat to replace, so new Lyric can be put on a coffee table or on a TV stand.

We charge £90 labour plus £10 materials for a Lyric T6/T6R installation. 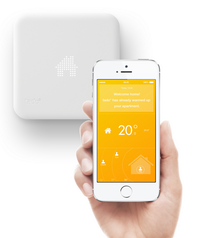 tado°  is another mainstream smart control from a Germany company. Being similar as Nest and Honeywell Lyric, it is also classified as ErP class IV (TPI) or ErP class V (OpenTherm).

If you do not already have a wired room thermostat the tado° Extension Kit is needed as wireless receiver for the Smart Thermostat.

Geofencing means that the tado° Smart Thermostat will automatically turn down the heating when no-one is at home and then begins to warm up when it detects the first person home by using your Smartphone’s locations. It also uses weather forecast integration by adapting the heat according to the forecast to save energy.

We charge £90 labour plus £10 materials for a tado° installation. 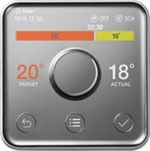 Hive was developed by British Gas, but you can buy them and install them on their own.

Hive is similar to Nest and can control both heating and hot water, either by manual dial adjustment or via the internet by smart phones remotely.

The only difference is Hive has a lower energy efficiency rate, it is still ErP class I, the same as an on-off thermostat, in contrast to Nest which is class IV.

We charge £90 labour plus £10 materials for a Hive installation.